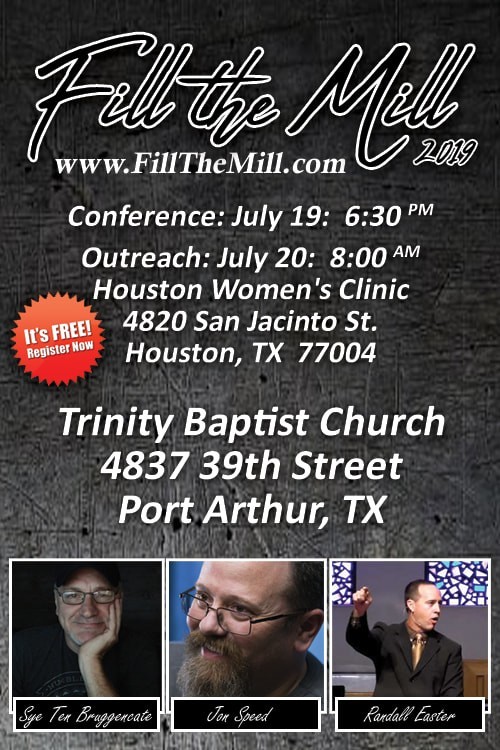 Trinity Baptist Church welcomes you to Fill the Mill 2019.  We will equip you to share the gospel of Jesus Christ with abortive parents on Friday July 19th.  On Saturday, July 20th, we will go to the clinic in Houston, TX to proclaim the gospel and offer real help to those considering abortion.   We will meet at 4820 San Jacinto Street in Houston (77004) at 8:00AM.  This is the address for Houston Women's Clinic.

Free housing is available by reservation in the Port Arthur area.  We have 150 rooms available from a nearby ministry.  To reserve your space, please email Pastor Jonathan Murdock at jonathan_murdock@yahoo.com.

Jonathan has been in the ministry for almost 20 years serving as an associate pastor and youth pastor for much of that time.  In 2008 he gave away all he owned and moved into the ghetto of Mexico City as a missionary.  While serving there he planted the church Solus Christus of Mexico City and also worked in the jungles of southern Mexico.  He has led teams 15 miles into the jungles where they preached the gospel to three tribes that had never heard the good news of Jesus Christ.  After almost 10 years in Mexico Jonathan and his family have moved back to Texas where he is pastor of Trinity Baptist Church, a bilingual congregation where all of the services are in both English and Spanish.  You can hear sermons and follow the church's work on Trinity Baptist Port Arthur Facebook page.

Our speakers on Friday night are:

Sye is a former factory worker from Ontario, Canada who shared the gospel with atheists wrongly for many years.  Now, he has discovered a Biblically consistent way of defending the faith.  His film, How to Answer the Fool, is available for free on Youtube.  The sequel, Debating Dillahunty, shows these principles in action as Sye debates atheist Matt Dillahunty.  More recently, Sye wrote an article and created a video challenging conservative social media star Matt Walsh on his presupposition that we cannot speak of our Biblical beliefs when we debate abortion.  You can follow Sye's ministry and get free resources at www.proofthatgodexists.org.

J. Randall Easter has been the Pastor of First Baptist Church of Briar for the last 18 years.  He studied at Southwestern Baptist Theological Seminary and received the Master of Divinity Degree in 2002 and a Master of Theology (with concentration in New Testament Exegesis and Exposition) in 2010. He has a great passion for Missions and travels several times a year to that end.  He mentors a church plant in Syracuse, NY, and annually preaches a conference in San Cristobal, Mexico. He came to FBC Briar after filling in one Sunday during a time in which the church had no pastor. At the time he was a world evangelist. He was offered the pastorship that same day after the service and through much prayer, decided this was where God was leading him.  He shepherds this local church with much love and compassion while teaching, preaching and showing by example how to follow Christ.

Randall has several joys and hobbies.  He loves to work with the Greek New Testament in studying and translating and his reading habits include Biographies, Puritan Writings and most anything theological.  Outside of work - Cycling is the way he relaxes.

Jon is the pastor of Christ is King Baptist Church in Syracuse, NY.  He graduated with a diploma in Bible and a concentration in Cross Cultural Missions from Practical Bible Training School in 1992.  In May of 2019 he received the Bachelor's in Religious Education in Christian Ministry from Davis College.  He co-produced the documentary Babies Are Murdered Here (available for free on Youtube) and has written a booklet called Evangelism in the New Testament. Jon went viral in January 2019 when he took a stand against the Reproductive Health Act in New York State by closing his book store down for the day on January 23rd.  He was interviewed on Fox & Friends, Glenn Beck and Sean Hannity.  Since then he has been working behind the scenes to help create Sanctuary Cities for the Unborn across the country.  He is also working on the sequel to the first film with End Abortion Now, to be called Babies Are Still Murdered Here.  You can follow Jon's latest on his Facebook page.